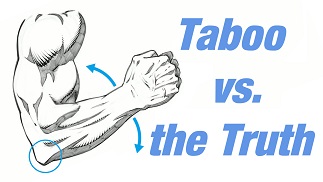 "Picking from the elbow", "elbow picking", and "arm picking" are some terms for what is considered by most lead guitar players to be taboo when it comes to picking technique.
So why do so many beginners automatically start picking from the elbow when they attempt to increase their picking speed? Simply put, the brain and body work together to find the easiest and quickest way to produce results. Usually this is fantastic! But unfortunately in this case, elbow picking turns out to be the quickest and fastest way for a beginner to start tremolo picking. They get results and the bad habit is reinforced. This article will explain why you should avoid locked wrist elbow picking, but then surprisingly it will explore how a combination of wrist and elbow is actually a very synergistic method.

On the left you can observe what I refer to as "side-to-side wrist" picking in my popular ebook PDF "Lead Guitar Practice Methodology", and on the right you can see how "elbow picking" works. When pivoting from the wrist, the side-to-side motion is very precise, efficient, and easy to do. Very little mass is being thrown about the fulcrum (wrist).
Compare this with pivoting from the elbow, where the entire mass of the forearm has to rapidly move about the fulcrum.

The case against strict elbow picking

Locking the wrist and pivoting purely from the elbow is a disaster for many reasons:

First, elbow picking genuinely risks tendon injury later in life.
One could assert "[insert guitarist here] picks from the elbow and he/she has never had an injury!"
In response one could argue that "[insert person here] drank and smoked all their life and lived to 100!"
Individual exceptions can and will occur, but on the whole, elbow pickers are putting themselves at risk.

Secondly, it breeds tension and is pure overkill. Why? Because firing large muscles in order to move an entire forelimb back and forth is wasted energy. It actually takes very little force to pick a note. Using the arm to pick is overkill, akin to attempting to sign your name on a document using a house painting brush.

Third of all, elbow picking lacks the precision of the wrist.
One could argue "[insert guitarst here] picks super fast and with complexity!"
I have seen these guitarists' picking hands up close in slow motion and I can tell you that they aren't as clean as you'd think. Strings are often sloppily clipped by the pick as it travels over during string crosses - something I make a huge effort to avoid for the sake of purity. The challenges of pickslanting are very troublesome when approached with a locked wrist and pivoting elbow.

Although I fervently try to stick to pure "side-to-side wrist" picking for the sake of purity and "good form", continuing to elbow pick but also freeing up the wrist creates a synergistic relationship which many famous players use with great success to shred like mad! Have you ever noticed how players like John Petrucci play with the wrist up to a certain speed, and then inject elbow motion to take it to the next level? Let's take a look: 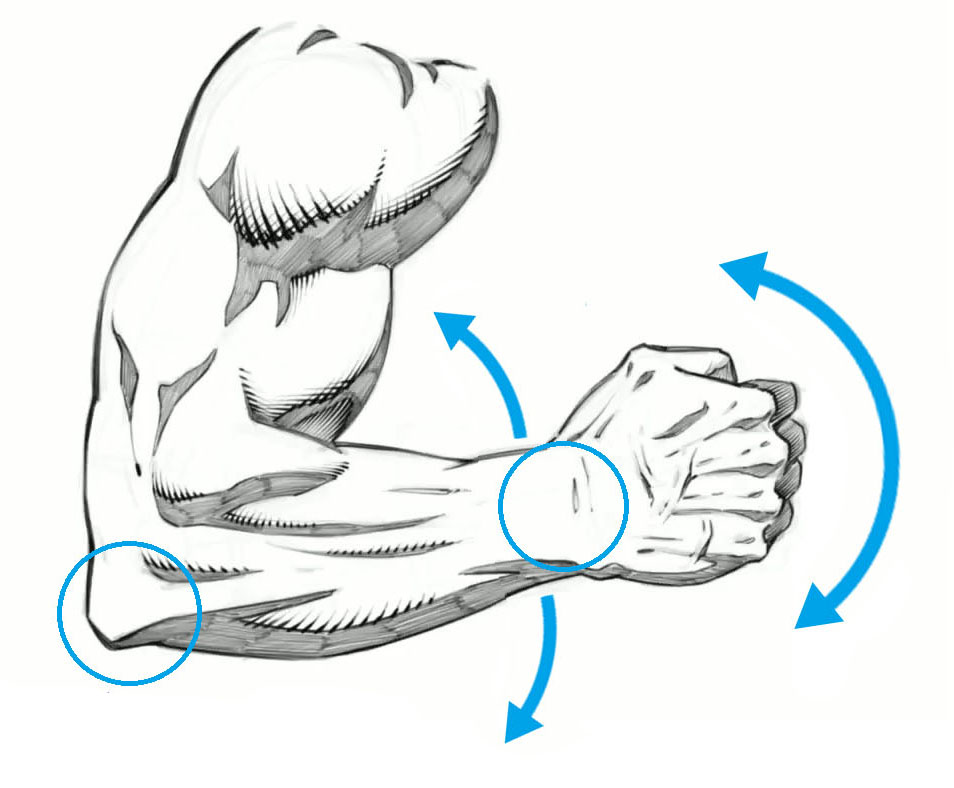 The wrist is freely picking side-to-side, but now the elbow picking creeps in, too. They both work together to execute the pickstokes. The reason these motions complement each other in such a way is because both "side-to-side wrist" picking and "elbow picking" operate along the same axis. They both move the pick along the same line through space. Energy provided from one fulcrum feeds the other, and vice versa. Rest your arm on a table and pivot at the elbow. You will notice that if the wrist is relaxed, it will pivot passively in response. That's evidence of this wrist and elbow synergy.

Don't pick purely from the elbow with a locked wrist. I recommend you use the "side-to-side wrist" picking method outlined in my ebook PDF "Lead Guitar Practice Methodology" as default. I can pick with pure wrist at about 240bpm 16th notes. Which in all fairness is about the fastest I've ever needed to play. With elbow assist I can get up to 280 - 300bpm. Because of the strength of the muscles involved, you will always play fastest with an elbow pivot assist. This is just a fact. Nevertheless I must urge you to resist the temptation for as long as possible.

Purchase and download my ebook PDF right now for just $15USD! Check out the trailer and description in this promo video to see if it's for you: