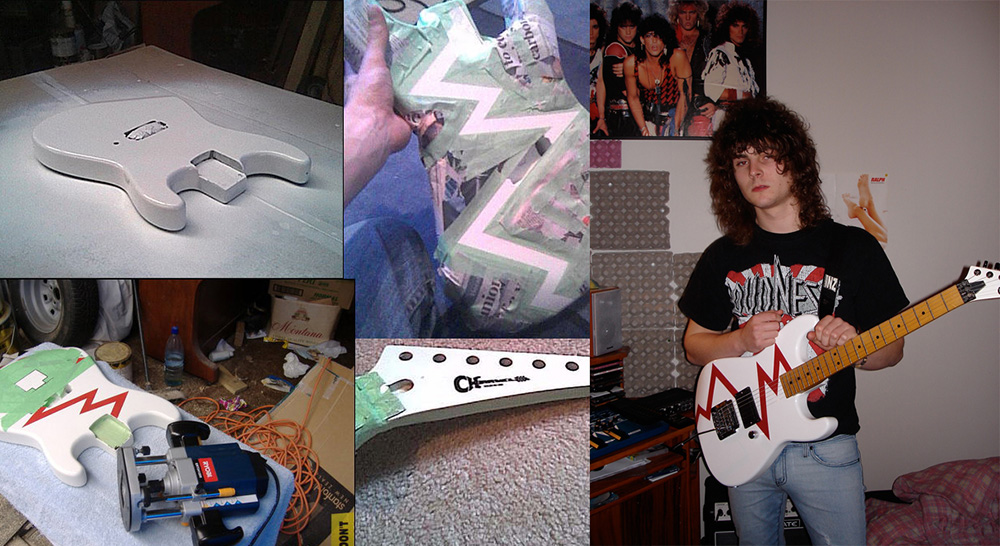 Welcome to my site! I'm Alfred Potter and I'm a lead guitarist living in Wellington, New Zealand (originally from Wales). Despite having a musical father, I showed seemingly no interest in musical instruments. I eventually took up electric guitar at the (late!) age of 17 after playing a lot of "GTA: Vice City" as I got completely hooked on the 80s rock sound. I picked up an entry-level Jackson JS-1 and got to work. I took a liking to prominent 80s bands and guitarists such as Ratt, Autograph, Tony MacAlpine and Vinnie Moore and knew very early on that I had found my life-long pursuit.

At age 18 I went to university which was a mistake as I wasn't too interested in anything academic. But it turned out to be one of the most productive years of my guitar-playing life! I would go to uni with my friend Andrei and skip classes just to jam and drink cup after cup of coffee. It was this year, 2008, which I believe was responsible for my huge increase in skill ( as I was jamming everyday!). That same year I taught myself how to restore and put together electric guitars, and so, from 80s charvel parts, I built myself a Steve Lynch replica guitar.

My progress as a lead guitarist was steady from here on - I started teaching myself to sweep at age 19, and also had a good go at alternate picking at age 20. But it wasn't until a few years later at the beginning of 2012 that I really got serious. I began a youtube channel and started releasing 'lick videos' and jam tracks. A year later, for the first time, I got a practice diary and started keeping records of my goals, exercises, strengths, weaknesses and metronome progress across all areas of my technique. Keeping a running record of my progress and logged hours in such a way drastically improved my playing.

Towards the end of 2013 I began recording my first album "Argonaut" which I finished in January of 2017. This was a punishing experience as I had to teach myself all about recording, mixing, and mastering music. It was worth it, though. I finally felt as though I had contributed something.

I got a sponsorship from both Hawk Picks and Kahler tremolo bridges and had a custom guitar built in time to begin my second album "Splendor of Sands". This album was to be quite different to my first on account of my music tastes changing slightly over the years from late 80s soloists to pretty much just Symphony X (or at least very little else!)

Email: This email address is being protected from spambots. You need JavaScript enabled to view it.