What are scale sequences?

A sequence is a repeated and ordered pattern applied to the notes of a scale or arpeggio.

From the moment you learn a scale, it is your duty as a musician to convert it into music. Playing scales up and down the same way forever simply won’t cut it. And so the use of scale sequences is the answer. Sequences are an essential part of fretboard freedom and musical freedom. The more you master, the more interesting and creative sounds you can make with scales. Using sequences can change the way in which your guitar leadwork affects a track/song/jam. For instance, simply playing up through the notes of a scale produces a rather bland and straightforward result, represented below by a straight line. Whereas by applying something powerfully intervallic like the second example in this article: the "Pentatonic 4ths" sequence, you can produce a far more jagged and melodic sound to the ear, represented below by the jagged rising line. 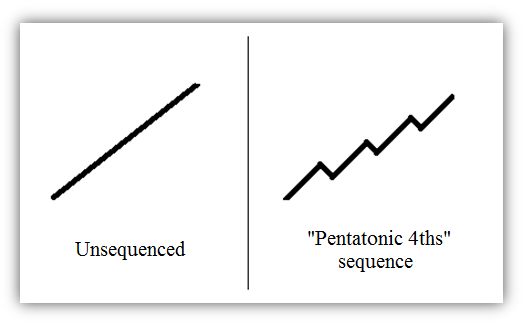 How to use them

Play through the examples. Alternate pick everything. Apply them to different positions/scales/modes/keys. Familiarise yourself with the different sound of each sequence. Next time you jam, make sure to incorporate them into your leads. Perhaps between licks, melodies or scale runs you already know. Remember to mix it up: play examples as 16th notes (4 notes per beat) but also try them as 8th note triplets (3 notes per beat). Different notes of the sequence will land on different beats and can change the sound. You may be very pleased with what you discover! Pay very close attention to the fretting fingering instructions under some ambiguous tabs. Play examples exactly as specified to avoid unnecessary difficulty and confusion.

Here is the first of four examples. Instead of playing the C major 3-notes-per-string (3NPS) scale up and down, we apply a sequence called "Linear Fours". The pattern goes like this: Forward 4 notes, back 1 note. When you step back that one note, the sequence begins again. Give it a go!

Example #2: "Pentatonic 4ths" in A minor

This example shows that sequences aren't limited to scales - they can be applied to arpeggios as well. Starting on the D note on the low E string we play through the 4 notes of the diminished arpeggio (Root, Min3, b5 & 6 AKA bb7). But we don't play them in order. Instead we play the first note, then jump over the second to play the third (Hence "Skipped 3rds") and then we step back a note to play the second. And from that note we skip up a third, then step back one, and so on it goes. Once again, pay attention to the fingering instructions below the tab. Love this sound!

Check out the video lesson!