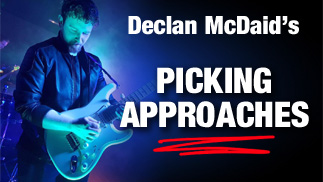 In this article, musician and tutor Declan McDaid shares his picking tips and approaches, including: pick choice, single string picking, and multistring strategies (alternate picking and economy picking). Along with tabs and explanations, this is sure to iron out a few creases in your technique, and get you thinking about how you can make your playing more economical.

Choosing the right pick, how to hold it, and our picking approach are all factors which greatly affect our ability to pick, but where do we start to get our picking hand to effortlessly nail those licks?

The first factor which must be considered is the type of pick you are using. Ideally a thicker pick (1mm upwards) is what I recommend. We do not want the pick to bend when picking through the string. Any movement in the pick when doing so can lead to inaccuracies due to not having full control of the pick. A pick that has a sharper tip is also highly recommended (look at Dunlop jazz III picks for an example). Such picks allow you to cut through the string a lot easier due to the sharper tip, compared with a more rounded pick, which most people use when they first start playing. You may also benefit from choosing a smaller pick, as these can help limit the amount of plastic travelling across the string when picking.

The next factor to take into account is how to hold a pick. Too many times I’ve seen players hold their pick with their thumb and middle finger, or thumb, index, and middle finger. Although I do believe there is no “correct” way to play guitar, I do think you are doing yourself a disservice if you hold your pick like this. Try holding the pick with just your thumb and index finger (again using a smaller pick will encourage this as you will find it difficult to fit your thumb, index, and middle finger all onto the small surface). Aside from feeling less clumsy, it will also free up the middle finger for other techniques such as tapping or hybrid picking. When holding the pick, try to show as little of it as possible. This will mean picking the string will be easier as there will be less pick traveling through the string. Finally, pick angle must be considered. I recommend angling the pick towards the guitar neck (between 10-30 degrees) to allow you to transition more smoothly from string to string.

This E minor lick will allow you to focus on "inside picking". "Inside picking" is where the pick stays on the inside of the strings when changing strings. Notice how the last pickstroke on the high e string is a downstroke and the first on the b string is an upstroke? I imagine inside picking to be like a wrestler running between the ropes, comparable to how the pick goes between the two strings when changing.  Looking for opportunities to inside pick rather than outside pick (which, conversely, is when the pick plays on the outside of the strings) should help you achieve easier string changes when alternate picking.

I generally try to avoid outside picking wherever possible. For 3-note-per-string modal shapes this can be difficult to do because if we are strict alternate picking (when ascending) we end up outside picking crossing every other string, due to the odd note groupings (See tabs below):

Economy picking is the easiest way to circumvent this outside picking dilemma. When traveling from one string to the next, we are going to continue hitting the next string with another downstroke, as we are already travelling in that direction (See tabs below):

Coming back the other way would look like the following (don't forget to apply this concept to all other modal shapes and positions):

This final exercise/lick (in E minor pentatonic) really helped me hone my economy picking skills. Take this idea and try it though all 5 positions. Notice when descending from the high e string to the B string, I am not economy picking. Considering my picking strategies, it would not make sense to economy pick here as inside picking works just fine for that string change.

It’s clear there are multiple factors which affect your picking. In order to have a great picking hand, I do believe each and every single factor requires intense scrutiny. If we do this to every aspect of our picking, it will all add up. Through these 4 exercises, we have covered: Alternate picking, inside and outside picking, and economy picking. I would recommend against becoming too attached to any one single approach. Every lick needs to be looked at on an individual basis. Some licks simply work better with alternate picking, and some work better with economy picking. Sitting down and thinking about the best approach will save you hours of practice. Practice smarter and always approach any lick in the most efficient way possible.