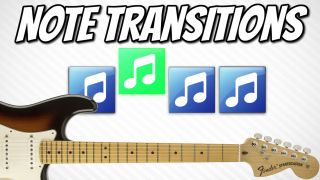 This is a lesson on how to play passages of notes in
a perfectly clean and intelligible way. You must eliminate silence between notes
to create a seamless stream of sound. Picture your notes as a brick wall. You
want to lay the bricks so tightly that there are no spaces in between them.

When a guitarist first begins learning, every movement is very deliberate and
conscious. When they play single notes one after another they have to stop,
find the next note, move their fingers there, and prepare to pluck the string.
All of these conscious actions lead to a period of silence/shuffling around
while they prepare to play the next note. And so a satisfying flow of notes is
not achieved.

The solution to technical problems is always to tackle the problem directly and with a targeted
exercise which is as small as possible so as to reduce the workload on the
brain and fingers and to ensure faster results.

Let’s achieve a loop of two perfect notes on a single string. On the high e string, the thinnest,
pluck the 12th fret. Let it sound for a moment. Now press the string
against the 15th fret with your pinkie, and the MOMENT you do, as in
instantaneously, pick the string. If you did this correctly you should have
heard the first note stop and the second note begin almost seamlessly. The only
sound in between should be the gentle percussive click of the pick striking the
string. Now lift your finger back off the 15th fret and immediately
pick again to return to the 12th fret. Again the notes should
transition seamlessly. Go back and forth between these two notes slowly and
perfectly. Remember to palm mute the other 5 strings to kill string noise.

This exercise is exactly the same as Ex #1 except that the second note is on the b string
instead of the high e. The purpose of this exercise is to keep the same clean flow
of notes going even while crossing strings. Keep both index finger and pinkie
touching the strings at all times. Never lift either finger off its string. To
fret a note simply press down gently and then pick. The other finger will be
gently resting on/muting the other string but NOT fretting it. To play the
other note simply reverse roles. So put simply, both fingers will be touching
the strings at all times but only one will ever be fretting at any given
moment. When the b string is being played, your palm should be muting the 4
lowest strings. When the high e string is being played, your palm should be
muting all 5 lower strings. Loop this.

You are now ready to apply your one and two string transitions to a scale fragment. Very slowly play
through the three highest strings of the E minor pentatonic scale. Focus
diligently on starting the next note as soon as the previous begins. Build that
perfect wall of notes. No space in between the bricks. Go in one direction.
Have a rest. And then return.

Check out the video lesson: